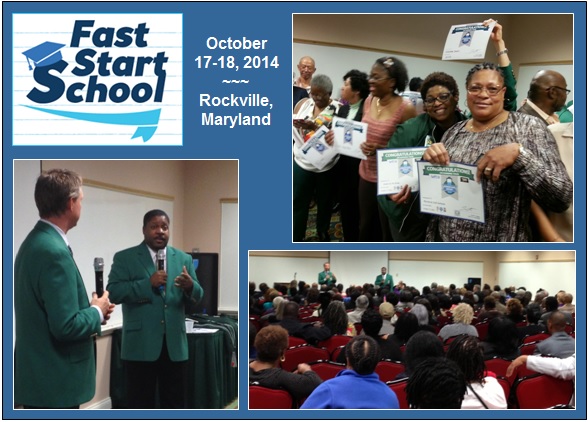 Wow, YTB is definitely back! With a nod back to the days of CRTA and First Class Trainings taught by Scott Tomer, and later by Directors, Scott and Chris presented live the Fast Start training that went through YTB from top to bottom, A to Z! The 2 Giants added a Friday night event to the training that featured recognition, awards, and promotions, with friends, family and guests there to cheer everyone on!

The DMV event on Friday and Saturday, October 17-18 was the first on the East coast, and even though it was soon after the Las Vegas celebration, Reps and RTAs arrived in style, with people traveling from all over the country! Regional Leaders Randy and Celetta Brown brought a bus from Chesapeake, Virginia. The Poconos crew, led by Coach’s Corner Aileen Cruz, arrived with four cars of excited people! Add in folks from New York, New Jersey, North Carolina, South Carolina, Philadelphia, and Pittsburgh! Directors Jeanie and Bill Sharpless made time to attend and promote their new Coach’s Corner members, June Brown and Jack Brown. Director Malcolm Alexander surprised Team PROMELL members Leon and Janet Braxton with their promotion to Regional Leader and newly positioned Director Joann White was presented with flowers and a plaque. All of the awards and recognition took place on Friday evening as excited YTB team members and guests had the opportunity to be in the spotlight and celebrate their impressive accomplishments. DJ Will Marshall pumped the music and CEOs Scott Tomer and Chris Cokley mingled and posed for photos as new pin levels and promotions were announced. As the night wound down, people filled the lobby, visited area restaurants or made their way back to their rooms to prepare for Saturday’s training!

The hotel reported folks trying to get in the training room and save their spot as early as 4:30 am Saturday morning! Team PROMELL’s Core team, led by PowerTeam Leader Alena Plasket, got registration underway at 8 am and everyone jumped in to assist as the crowd grew. At 9:30 am Scott put on a timer clock that began to count down the minutes while showing clips and video of our incredible business and travel industry. The room set for 250 filled up and more chairs were brought in as the anticipation built. Director Alexander warmed the crowd and his team flowed in with their Team PROMELL t-shirts promoting the travel takeover has begun, get paid to travel, ask me how! Director Loranzo Ladson opened the morning with his story and testimony of YTB – from banker to Travel Agent!

CEO Tomer began to share the major details of the YTB story and current opportunities as attendance grew to nearly 300 people! Scott spoke about our history, the recent merger, the recent growth explosion, the numbers, and the new YTB. He broke down step-by-step the details to the best compensation plan on the planet. He laid out what we have learned from the past, what the two companies coming together means and the vision for where we’re going. For the first time ever we saw the Director Level 1 white sports car with a red stripe and the Director Level 2 Jaguar, Mercedes and BMW convertible photos! The excited room broke for lunch in preparation for PTN’s CEO and master trainer, Chris Cokley.

The afternoon session was all about mindset and what it takes to win. What better way to start off than with Director Renee Toppin from Philadelphia. Chris then brought up other Directors to speak before starting training in earnest. He asked, “How can you win if you don’t show up?” He continued, “Winning isn’t easy; it’s hard and it’s work! You need to focus and develop a set of skills that will take you to the top.” Chris showed photos and explained the trials and tribulations and the ups and downs of his rise in network marketing. He went through the principles of winning and the mindset needed to achieve the type of success possible in the travel industry and YTB.

Host Director Alexander closed out the training, speaking passionately on past successes and the goal that YTB will be bigger and better! He noted that a major theme of the two-day event, beginning with Scott, to Directors, to Chris at the close, was that it’s now time to build! Earn $1,000 Bonuses! Help YTB take over the world! He ended by saying, “This has been one of the biggest Saturday trainings in years and this is just the beginning of the new YTB/PTN! Don’t miss the last Fast Start Schools of this year – Atlanta on November 7-8 or Philadelphia on November 21-22. This is your business, this is your chance, this is our opportunity, now let’s go get it!”